Negative numbers in Red in Excel?

Want to learn how to Differentiate Negative Numbers in Excel? You’ve come to the right place!

There are 2 ways in which we can make negative numbers stand out in Excel:

Let’s take an example and understand how each of these techniques works.

Excel has the capability to change the formatting of a cell based dynamically based on the content of the cell and this capability is referred as “Conditional Formatting”. Using this let’s try to make all negative numbers appear in red.

The second method of changing the formatting of the negative numbers would be to change the Number format of the cells. We’ll explore how this can be done in the following steps

Finally, this completes the formatting of negative numbers using the Number Formatting option.

Since the negative numbers are highlighted, going through the large sets of information in much easier.

Bonus: Check out our Youtube Video about Custom Number formatting. You can also download our Custom Number Formatting Cheat sheet using the form below!

Join the newsletter & Get your CHEAT SHEET! 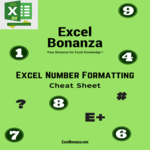 Enter your name and email to get our custom number formatting cheat sheet and Join the Newsletter!

Success! Now check your email to confirm your subscription and get your cheat sheet!

Success! Now check your email to confirm your subscription.

Latest posts by Abdelrahman Abdou (see all)
It's only fair to share...

About the Author: Abdelrahman Abdou